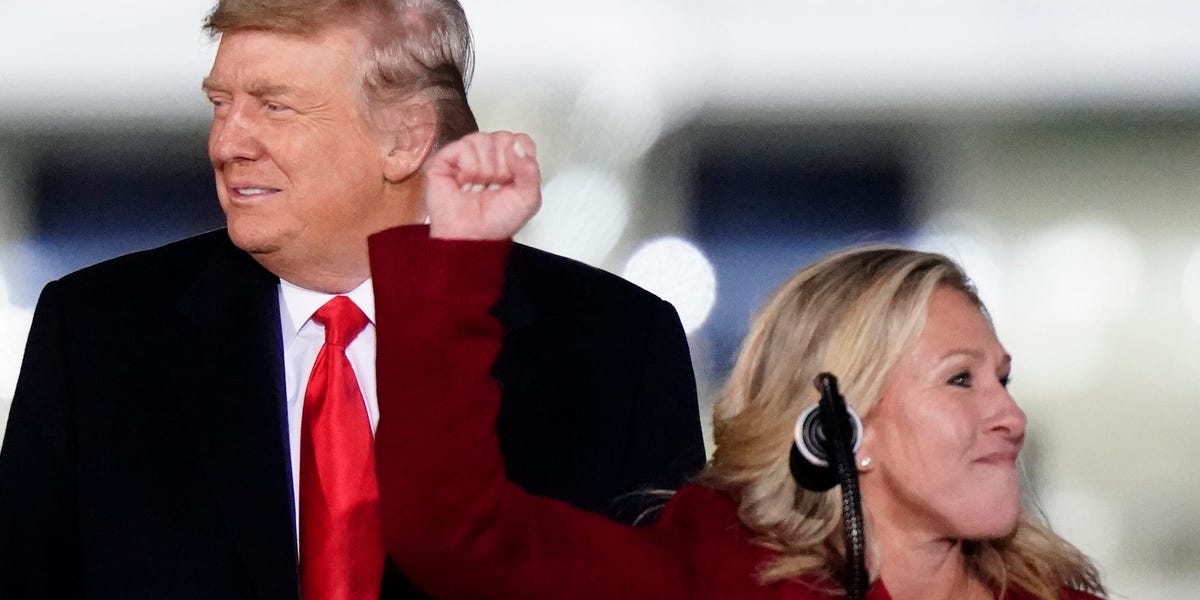 The transaction became public after Greene filed a required disclosure with the House Clerk on Tuesday. 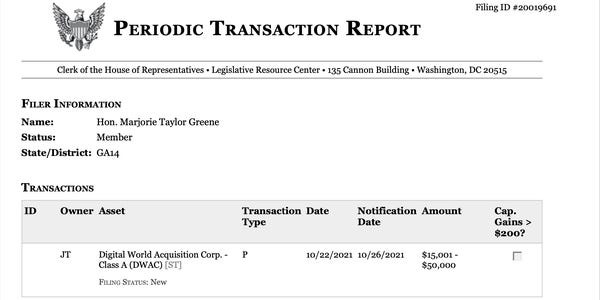 Trump announced the launch of TRUTH Social last week, touting it as a way to “stand up to the tyranny of Big Tech.” The app is currently available for pre-order on Apple’s App Store, and is set to launch an on invitee-only basis next month. It will then become public in the first quarter of 2022.

“We live in a world where the Taliban has a huge presence on Twitter, yet your favorite American President has been silenced,” Trump said in his statement announcing the launch. “Everyone asks me why doesn’t someone stand up to Big Tech? Well, we will be soon!”

The platform will be launched by a new company called Trump Media & Technology Group (TMTG), which will go public via a merger with the special purpose acquisition company (SPAC) Digital World Acquisition Corp., which Greene invested in.

Insider reported last week that the new company’s terms of services forbid users from doing anything to “disparage, tarnish, or otherwise harm, in our opinion, us and/or the Site.”

This isn’t the first time the Georgia Republican has made notable stock purchases. Insider reported in September that Greene had spent significant sums on stock in companies that support Black Lives Matter, despite the congresswoman’s vocal stance against the racial justice movement.

Reached for comment, the congresswoman’s office declined to answer questions about exactly how much her investment was worth, why she made it, and whether she intends to join the new platform when it launches. “This transaction was reported in compliance with House rules and provides all required details about the transaction,” a spokesman said.

If you can’t beat ’em, join ’em. Former President Donald Trump announced his plans to launch a new media company Wednesday night, in an attempt to “fight back against Big Tech,” according to a statement posted to Twitter by the ex-commander-in-chief’s spokesperson, Liz Harrington.  The new venture’s first project will apparently be a social media network called “TRUTH…

Two right-wing social media upstarts, Rumble and the parent company of Truth Social, last year agreed to be taken public by SPACs.Fast forward: Rumble remains on track to complete its merger, and possibly to build more than just a niche alternative to YouTube. Truth Social’s deal is stuck in limbo, and yesterday lost its raison…

When Donald Trump announced his 2024 comeback attempt at Mar-a-Lago, he complained about being a victim, but that same description in The New York Times appeared to enrage the former president.Columnist Maureen Dowd wrote about the victimization claim under the headline, “Trump, Macho Macho Victim.””In a Maryland suburb I covered long ago, a fire chief…